Together with its customer, ABB AG, Huettemann Logistik GmbH moved into the new rental space in the Mannheim turbine factory at the beginning of July. With around 18 employees, Huettemann provides logistics, packaging and shipping services here, among other things.

Now the time has finally come, the branch of Huettemann Logistik from Ladenburg has moved into its new location in Mannheim-Käfertal. The reason for the move was the lack of space in Ladenburg, as the industrial area was gradually being encircled by residential development. But ABB AG was also the driving force behind the change: “The customer ABB had been planning to move its location from Ladenburg to Mannheim for some time,” explains Francesco Montalbano. “This is where the employees of the operational units – especially the drive technology and process automation divisions – of the research centre and the service divisions will now be located.” ABB AG hopes that the merger of the Mannheim and Ladenburg sites will increase efficiency and reduce costs, as well as optimise competitiveness. In addition to ABB AG, currently the Huettemann Group’s “oldest” logistics customer, HITACHI Energy Germany AG will also move into the new logistics centre in Mannheim.

“When planning, we looked carefully at where to put what in order to have short distances and to be able to serve our customers optimally,” says warehouse manager Ulrike Winkelmann. Outside the warehouse, the offices and sanitary facilities have been built in modern containers. The move was planned down to the smallest detail: “We tried to keep the bottlenecks as short as possible,” says Ulrike Winkelmann.

The area of the turbine factory covers about 14 hectares. Together with the city of Mannheim, the real estate company Aurelis, which also carried out the conversion of Huettemann Logistik, plans to develop the formerly closed industrial site into a modern commercial quarter. Office space of 13,000 square metres is also to be built on the edge of the quarter. 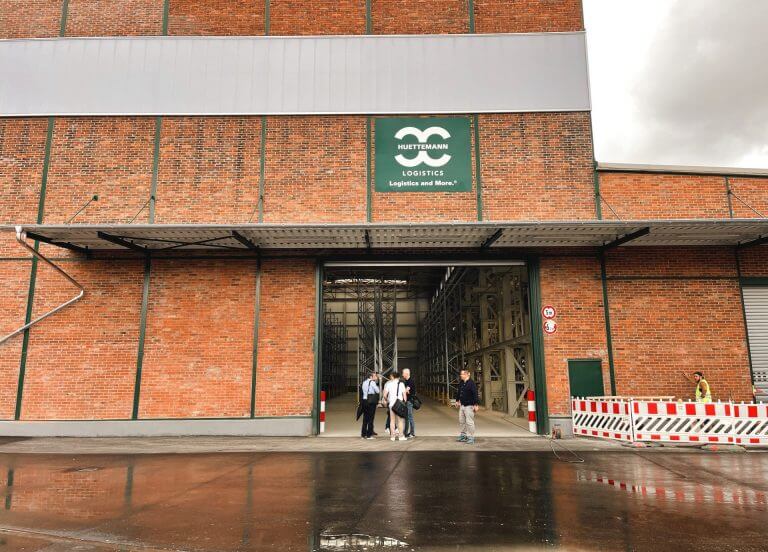 Have we aroused your interest?

Write to us or give us a call.