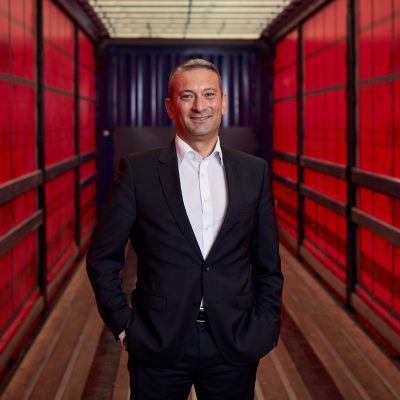 Çetin Çelik, born in 74, has been Managing Director of M+F Spedition, headquartered in Nordhorn, since 2015 and has been with the company for more than 25 years. He learned his trade at a border forwarding company in Lower Saxony, where he completed vocational training as a forwarding agent. In 1995 he joined M+F Spedition in Nordhorn as a commercial clerk for import transports from Great Britain and after only two years he took over responsibility for quality management as well as the sales branch of the company.

In this role, he played a major role in shaping the current focus of M+F Spedition: On the one hand, he expanded transports to and from Great Britain, making the company one of the top UK forwarders today. On the other hand, he developed the logistics division with a focus on the toy industry, which is one of the main pillars of the company today. M+F Spedition manages one of the largest toy logistics centres in Europe in Nordhorn.

In 2013, he took over the management of the branch, and in 2015 he finally became the managing director: “Since the beginning, I have appreciated and admired the dynamism and steady growth of our group of companies,” says Çetin Çelik. “With short decision-making processes, a willingness to invest and trust from Huettemann, we were able to shape M+F Spedition into the leading logistics company and the fastest-growing company in the region.”

Çetin Çelik is the father of three children. In his spare time, he is involved in the Islamic community in Bad Bentheim, among other things, and promotes intercultural exchange.

We have aroused your interest?

Wri­te to us or give us a call.